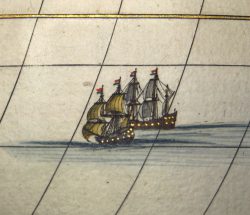 A fine copy of Janssonius’ historical atlas in an exceptional coloring and lavishly heightened with gold. Contemporary hand-colored and gold-heightened title page, 30 p., 264 p. Folio 50 x 32 cm. Gilt-paneled vellum editor’s binding. (small tear on the upper capital, slightly soiled, without the ties, only slightly bumped or rubbed). 60 maps contemporary colored and heightened in gold, including 2 foldings. This atlas combined the maps from the Hornius historical atlas and the historical atlas of Greece. It is divided into two parts: Biblical history, with 12 maps, and secular history with 48 maps including 4 maps for the Peutinger map. Joannes Janssonius (Arnhem, 1588-1664), son of the Arnhem publisher Jan Janssen, married Elisabeth Hondius, daughter of Jodocus Hondius, in Amsterdam in 1612. After his marriage, he settled down in this town as a bookseller and publisher of cartographic material. In 1618 he established himself in Amsterdam next door to Blaeu’s book shop. He entered into serious competition with Willem Jansz. Blaeu when copying Blaeu’s Licht der Zeevaert after the expiration of the privilege in 1620. His activities not only concerned the publication of atlases and books, but also of single maps and an extensive book trade with branches in Frankfurt, Danzig, Stockholm, Copenhagen, Berlin, Koningsbergen, Geneva, and Lyon. In 1631 he began publishing atlases together with Henricus Hondius. In the early 1640s, Henricus Hondius left the atlas publishing business completely to Janssonius. Competition with Joan Blaeu, Willem’s son and successor, in atlas production, prompted Janssonius to enlarge his Atlas Novus finally into a work of six volumes, into which a sea atlas and an atlas of the Old World were inserted. Other atlases published by Janssonius are Mercator’s Atlas Minor, Hornius’s historical atlas (1652), the town books in eight volumes (1657), Cellarius’s Atlas Coelestis, and several sea atlases and pilot guides. After the death of Joannes Janssonius in 1664, the shop and publishing firm was continued by the heirs under the direction of Johannes van Waesbergen (c. 1616-1681), son-in-law of Joannes. Van Waesbergen added the name of Janssonius to his own. In 1676, Joannes Janssonius’s heirs sold by auction “all the remaining Atlases in Latin, French, High and Low German, as well as the Stedeboecken in Latin, in 8 volumes, bound and unbound, maps, plates belonging to the Atlas and Stedeboecken.” The copperplates from Janssonius’ atlases were afterward sold to Schenk and Valck. Van der Krogt 1, 436C